Ecological meeting at the source of the river Skrapež

Organized by the residents of the local self-government unit Crveni breg, Makovište village, and in cooperation with the Club "Ars Nova", an ecological meeting was held on September 21st at the source and upper stream of the river Skrapež, at the foot of the mountain Povlen.

The river Skrapež sources on the southeastern slopes of the mountain Povlen, it is 47.7 km long, and it flows into Đetinja river in the Požeško polje. Of the left tributaries of the Skrapež river, the Dobrinjska river is the longest, and of the right the Lužnica river.

On this occasion, the organizers of the meeting announced activities on arranging this area, which will be realized by December 15, 2020, by setting up information boards in order to mark the area and instruct visitors on the proper behavior. These boards will be placed on the main road Valjevo - Kosjerić, locality Burma, at the source of the river Skrapež, as well as signposts directing to the source of the river Skrapež.

At the initiative of the organizers and with the support of the meeting participants, a proposal was made to initiate the procedure of the protection and designation as monuments of nature for the source of the river Skrapež, as well as for the site Burma hill, which is in the Inventory of the Geoheritage of Serbia - sites of historical-geological and stratigraphic heritage of Cretaceous age. 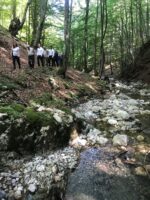 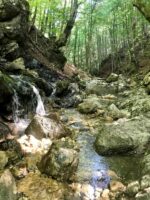