The protection regime of the second degree, with the total area of 348.23 ha, has been established at the following sites: "Brezjak", measuring 9.4727 ha, with mixed forests of fir, beech, aspen, birch, sycamore maple and wild cherry, "Dobre vode" measuring 14.4430 ha, with the most conserved stands of beech and fir and with occurrence of sycamore maple and Scots elm, "Savin laz", measuring 54.8213 ha, characterized by the subalpine beech forest type Fagetum moesiacae subalpinum typicum, "Gvozdac river", measuring 13.1891 ha, with conserved mixed fir and beech forests of Abieti Fagetum Typicum, "Brežanska river", measuring 256.2862 ha, which is characterized by a complex of xerothermophyllic Hungarian oak-Turkey oak and other types of forests, as well as forests of sessile oak and hornbeam (Ostryo-Quercetum dalechampii serpentinicum).

The protection regime of the third degree, with the total area of 3495.26 ha, has been established at the following sites: "Korita Cvetalica", a habitat of the great yellow gentian, "Gvozdac river canyon", a habitat of lilac and "Prerovo’s river Gajevača" within which there are watercourses with small waterfalls.

Without protection status prior to 2014

Decree on the designation of the Special Nature Reserve "Goč-Gvozdac" ("Official Gazette of the Republic of Serbia", No. 99/2014)

Protected area "Goč-Gvozdac" is an extensively afforested mountain area, which has been proclaimed the Teaching and Research Center of Serbia due to its characteristic forest mosaic of autochthonous tree species of Serbia, and as such has been improving and developing for fifty years. The representativeness of this area is reflected in the presence of 650 plant species, among which there are endemic, rare, endangered and internationally important species. The forest complex consists of 25 species of trees, of which the endemics of the Balkan Peninsula - Heldreich's maple or Balkan maple and European black pine variety - are distinguished. In addition, the special rarity of Goč area is the conserved beech-fir forest community.
The Special Nature Reserve is also inhabited by 129 species of birds, 108 of which are nesting birds, 20 species of amphibians and reptiles, 27 species of mammals, including otter, ermine (short-tailed weasel), edible dormouse and common weasel.
Due to its natural characteristics, water abundance, conserved remains of early mining dating back to the Roman period, and in addition to the priority scientific-research function and the fact of being a training ground for forest management, this area is also characterized by tourist potential of a dominant health and recreational character. 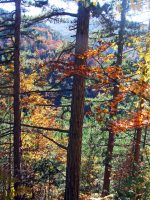