According to the Decision on the protection of Strict Nature Reserve "Kukavica", Municipal Assembly of Vladičin Han, No. 021-26/80-4 of 1980, a pure beech stand (Fagus moesiaca) was placed under protection.

Strict Nature Reserve "Kukavica" is the largest reserve of pure beech forest (Fagetum moesiacae serbicum Rud.) that represents an autochthonous, spontaneously developed forest community of complete canopy cover, favorable habitat conditions, with beech trees about 140 years old. This reserve distributes in the southeastern Serbia on the riparian area of Južna Morava river (South Morava), in the Pčinja and Jablanica districts. The Kukavica mountain massif belongs to the Rhodope mountain system, and its highest peak Vlajina is at an altitude of 1442 m above sea level. The bedrock is predominantly composed of gneiss in the decay stage, formed by metamorphosis of fine-grained clastites. The parent substrate consists mainly of crystalline schists, and the soils belong to the developmental series on acidic and siliceous rocks. The most common soil types are acidic brown soils of the profile A- (B) -C. The protected forest ecosystem of the reserve belongs to a complex of mesophyllic beech and mixed beech-coniferous forest types. The conserved state of the virgin forest structure stands in the Kukavica Nature Reserve is the basis for the conservation of the beech gene pool and its communities. In the vegetation belt of about 500 m, that is, the height range from 670 m to 1200 m of altitude, the changes in orographic and edaphic characteristics have led to the emergence of several different communities, that is, types of beech forests that have ecological value and biological stability of a strictly protected mountain beech community. The following types of beech forests occur in the reserve area:

The Kukavica area is rich in the basins of Kukavička, Jabukovačka, Rdovska, Letovička, Jastrebačka and Bistrička rivers. In the area of the reserve and its surroundings, there are a large number of diverse habitats of many species of fauna and flora. 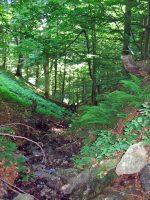