The National park "Šar planina" extends to the far south of Serbia, in the Autonomous Province of Kosovo and Metohija, along the main ridge, with peaks above 2000 m above sea level and the highest peak of Bistra (2641 m). It encompasses the northern and northwestern parts of the main massif, to which the Šar planina branches of Ošljak, Ostrovica and Kodža Balkan are connected by Prevalac.

Šar Mountain is located in the area of Kosovo and Metohija and represents a 85 km long southern border area of Serbia. It was designated as a national park in 1993 within temporary borders of 39.000 ha. However, it was planned that the permanent boundaries should encompass an area of about 97.000 ha. The very complex geological structure of the Šar Mountain includes rocks of different geological age, ranging from Paleozoic granites, Mesozoic limestones and eruptive rocks, to glacial Quaternary sediments and contemporary river sediments. These rocks have built a major ridge with over 30 peaks ranging from 2500 to 2652 m above sea level (Bistra). Below the peaks are high mountain passes, plateaus and side ridges carved with torrential rivers and streams.
Glacial and periglacial morphology are prevalent throughout the massif and its branches. Particularly attractive are the glacial cirques, ice sheets, giant stone blocks, talus slopes, vertical cliffs, deep gorges and canyons, 70 glacial and 20 nivational lakes, known as "mountain eyes".
Šar Mountain is one of the richest mountains in the Balkan Peninsula in terms of waters. At every turn, one can find cold springs and streams, high mountainous peat bogs, torrential mountain rivers which, through cascades and waterfalls , descend to the valleys and flow into the two largest river of Šar mountain - Prizrenska Bistrica and Lepenac.
1800 plant species inhabit Šar Mountain. The most significant are the numerous tertiary and glacial relics and 339 Balkan endemics, of which 18 are local endemics, present exclusively on this massif: Achillea alexandriregis, Bornmullera dieckii, Dianthus scardicus, Crocus scardicus, Verbascum scardicolum, Cerastium neoscardicum, Potentilla doerfleri, Hieracium scardicolum and others.
Like the flora, vegetation is characterized by an extraordinary diversity. 190 plant communities, the character of which varies from Mediterranean-sub-Mediterranean in river valleys to subarctic at the highest peaks, have been described within the national park. Particularly valuable are the unique communities of endemorelict Serbian ramonda (Ramonda serbica) in limestone gorges, forest communities of endemorelict Heldreich's pine (Pinus heldreichii), Balkan pine (Pinus peuce) and shrub communities of alpenrose (Rhododendron ferrugineum).
The National Park is home to 147 species of prime butterflies, 45 species of amphibians and reptiles, about 200 species of birds and 32 species of mammals (excluding bats), making it one of the richest areas of Europe in terms of fauna. In the Park occur the griffon vulture (Gyps fulvus), the golden eagle (Aquila chrysaetos), the peregrine falcon (Falco peregrinus), the white-winged snowfinch (Montifringilla nivalis), bearded vulture (Gypaetus barbatus), western capercaillie (Tetrao urogallus), the Balkan snow vole (Dinaromys bogdanovi), European pine marten (Martes martes), beech marten (Martes foina), otter (Lutra lutra), wildcat (Felis silvestris), lynx (Lynx lynx), brown bear (Ursus arctos) and chamois (Rupicapra rupicapra).
Species diversity, high representation of endemorelics, nationally and globally significant species, make the Šar Mountain one of the most important centers of Balkan high-mountainous endemism and one of Europe's "hot spots" of biodiversity. National Park Šar Mountain is also characterized by unique cultural heritage. There are 45 churches and monasteries built in the period from 12th to 16th century, in the medieval Serbia. The most important cultural and historical buildings include the hermitage cell and the Monastery of St. Petar Koriški from the 13th century, the Church of St. Petka from the 14th century, the Church of the Holy Virgin Hodegetria from the 14th century, the Monastery of the Holy Trinity from the 15th century, the remains of the Tzar Dušan’s town and the complex of the Holy Archangels Monastery from the 14th century, near Prizren, as well as other cultural monuments of the greatest national importance. 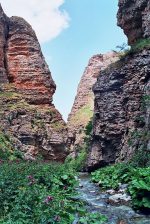 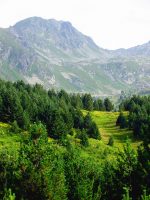