As part of the program of the international jazz festival Nisville, a specific segment was the Green zone of the festival at the area of the Niš Fortress next to the Vodena kapija, where the Institute for Nature Conservation of Serbia realized numerous programs for children, youth and adults on nature of our country in the period August 11-15.

This year's program of the Institute especially attracted the youngest visitors and their parents. Within the art workshops, the children got to know the natural rarities of southeastern Serbia and tried their hand at drawing and making the plasticine modeled images of protected species: Natalie's ramonda, which can be found in Jelašnica gorge and Suva planina Mt., wild orchid species called lady's-slipper orchid, the only habitat of which in Serbia is on Suva planina, the lynx as a representative of wild cats, which lives in Europe, the Greek tortoise, the northernmost habitat of which is the area of southern Serbia, as well as the woody species of cherry laurel, which can be found in the forest reserve Mustafa near Bosilegrad.

Especially interesting for the youngest was the play called Max's Laboratory, prepared by the representatives of the Natural History Center from Svilajnac, on the topic of volcanoes and other natural phenomena, as well as dinosaur exhibits from the Center’s permanent exhibition for children. The center's mascot Svidin was also there for the amusement of the children.

Within these workshops, the children drew more than 100 drawings that were exhibited on the last day of the festival, on Sunday, August 15, 2021. The young authors took their parents, friends and relatives to the exhibition of their works. While the children were engaged in the creative activities, their parents had the opportunity to visit the Green cinema at the Institute's exhibiting space and watch promotional videos about protected areas: National Park "Đerdap", Special Nature Reserve "Jerma", Nature Park "Stara Planina", Nature Monument "Cerjanska pećina", Nature Monument "Lalinačka slatina", but also about natural areas of the municipality of Despotovac and surroundings of Niš, as well as about the Biosphere Reserve "Golija-Studenica", Outstanding Natural Landscape "Jadovnik", Nature Monument "Klisura reke Mileševke" (Mileševka river gorge), Nature Monument "Sopotnica" and primeval beech forest reserves.

The rich program of the festival Green zone was completed by an exhibition of the Cerjanska cave photographs, while within the quiz game Reward wheel, in which children with the help of adults had to answer the questions about Serbian nature, the awards such as tickets for the visit to the Natural History Center in Svilajnac and the Resavska cave were provided for the participants, but also the publications of the Institute for Nature Conservation of Serbia.

Visitors could also find out about the possibilities of visiting protected areas in Serbia at the Info Desk on Nature and through promotional materials and conversations with representatives of the Institute for Nature Conservation of Serbia, Cerjanska cave, Resavska cave and Uvac Reserve.

The program of the festival Green zone was implemented by the Institute for Nature Conservation of Serbia in cooperation with the Natural History Center Svilajnac, the Directorate for Construction of the City of Niš, PE "Resavska cave", Reserve "Uvac" and PE "Srbijašume". 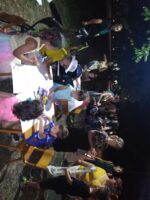 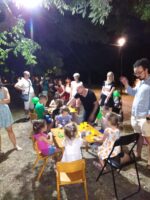