Šargan– Mokra Gora has been placed under protection with the aim of conserving and enhancing the diversity and beauty of the landscape, the diversity and richness of the wild flora and fauna, and in particular for the reason of conserving the endangered, rare and endemic species of plants, animals, their communities and the ancient forests of European black pine and Scots pine, as well as for the conservation and maintaining of the quality of the main environmental factors (water, air and land), objects of folks architecture, the "Šargan Eight" narrow-gauge railway, the ethno-settlement "Drvengrad", the examples and forms of traditional way of life, spatial planning and sustainable development of tourism, agriculture and forestry, all for the sake of science, culture, education and recreation.

Mokra Gora is a structural valley in western Serbia, which is located between the massifs of Tara and Zlatibor. This valley ends with the Šargan pass, which to the north forms a natural connection with Zborište, the highest peak of the Tara Mountain, and to the south with the Prepelište, that is Zlatibor Mt.

The beauty of the area is enhanced by the dynamic relief with deep-cut valleys and gorges of the Beli Rzav, Crni Rzav and Kamiška rivers, above which numerous peaks and mountain passes rise. There is also a number of mineral springs in this area. The most famous of them is Bele vode spring.

The particular natural value of the protected area is embodied in the lush forest complexes that cover the slopes of Mokra Gora. Within the large forest complexes, pure and mixed forests of European black (Pinus nigra) and Scots pine (Pinus sylvestris) are distinguished by their originality and attractiveness. In addition to the forests, due to its bedrock and specific climate, this area is inhabited by diverse flora and fauna, while mosaically distributed mountain meadows and pastures give this area an invaluable landscape quality. The Mokra Gora area is characterized by great floristic diversity, as more than 700 species of vascular flora, that is, about 22 percent of the entire flora of Serbia, inhabit this area.

Mokra Gora, along with Šargan, was in the ancient times on an important crossroads, as evidenced by the remains of the Roman cobbled road. The overall attractiveness of the landscape, in harmony with the conserved nature, is complemented by a special technical-solution and tourist attraction, the narrow- gauge railway "Šarganska osmica" (Šargan Eight) and the ethno settlement "Drvengrad" on Mećavnik. The "Šargan Eight", widely known for its remarkable technical solution in overcoming the great ascent at a short distance, made Mokra Gora exceptional and distinguished, and the particular attractiveness of the protected area was made world-wide known by the ethno-settlement "Drvengrad", which was transformed from a fantasy world into reality by renowned film director Emir Kusturica, who dedicated it to the advancement of culture and nature. 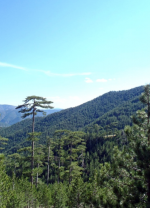