Protection category ΙΙ – protected area of regional, that is, of great importance

The Municipality of Sokobanja – cadastre municipalities Soko banja and Blendija

Decision on the Protection of Mixed Forest Stand with the Moravica River Canyon in the immediate vicinity of Sokobanja, at a site called "Lepterija-Sokograd", No. 01-020/50-1969-Municipality Assembly of Sokobanja, from 1969

Decree on the Designation of the Outstanding Natural Landscape "Lepterija-Sokograd" ("Official Gazette of RS", No. 25/2002)

The gorge of the Moravica river has been put under protection as Outstanding Natural Landscape "Lepterija - Sokograd".
"Lepterija-Sokograd" is an area of outstanding landscape diversity with attractive geomorphological forms and phenomena, rich and diverse flora and fauna and cultural and historical values (medieval fortress Sokograd, a cultural property of great importance).
The Lepterija - Sokograd complex in eastern Serbia, in the immediate vicinity of Sokobanja, comprises several striking units. These are the picturesque gorge of the Moravica river, the fluvio-denudational extension of Lepterija and the medieval fortress of Sokograd.
The main characteristic of the Outstanding Natural Landscape is the picturesque Moravica gorge, the medieval fortification at the gorge, the high degree of nature conservation and the considerable area under forests with relict polydominant communities.
The Moravica river gorge, a tributary of the Južna Morava (South Morava), is a 3 km long epigenetic river gorge that is cut into the northern foothills of Devica Mt. It is characterized by meandering, with the frequent occurrence of imposing rocky sections that on some parts of the river stream take on the characteristics of the canyon valley. These sections represent the main morphological characteristics of the gorge. The river bed and banks of the Moravica river are rocky, with small waterfalls, rapids and whirlpools.
The depth of the gorge in relation to the top of the elevation of Popovac on its right is 140 meters (river bed at the bridge is at 305 m and the top of the hill at 443 m of altitude.). The river terraces are poorly conserved, and the most pronounced terrace shape is represented by the flattened headland in the meander at the site called "Pećina", at about 50 m above the river bed.
On the most exposed limestone foreland there are the remains of the medieval monumental fortress Sokograd. Not far from there, the remains of a small medieval church were discovered.
Almost the entire gorge is overgrown with impassable forests and thickets of Oriental hornbeam (Carpinus orientalis), Turkey oak, Hungarian oak, sessile oak (Quercus cerris, Q. frainetto, Q. petraea), as well as other, mainly thermophyllic deciduous trees and shrubs. The gorge is inhabited by a large number of animal species that are important both nationally and globally: northern crested newt (Triturus cristatus), the southern white-breasted hedgehog (Erinaceus concolor), hazel dormouse (Muscardinus avellanarius), ermine (Mustela erminea), common weasel (Mustela nivalis), white stork (Ciconia ciconia), Eurasian hobby (Falco subbuteo), long-eared owl (Asio otus), hoopoe (Upupa epops), great spotted woodpecker (Dendrocopos major) and many others.
Below the building of the resort complex 50 m upstream of the wooden bridge, on the left side of Moravica, there is a very strong karst spring in the river bed level. The spring is enclosed by a concrete catchment facility housing a hydrophore of the pumping capacity of 18 l/ s for the water supply of the resort. 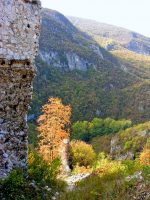 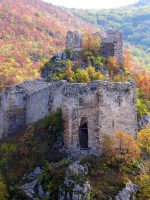