Protection regime of the first degree - strict protection (848 ha 20 a 95 m² or 4.68% of the area) has been established in the part of the area with original, unaltered or slightly altered ecosystems of great scientific and practical importance. This area extends from the peak Mosor, further across the peaks Sokolov kamen, Trem, Točila and Smrdan all the way to Ržanca and Divna gorica. It also includes cliffs below these peaks on the north side of the mountain.

Protection regime of the second degree - active protection (2.194 ha 54 a 37 m² or 12.11% of the area) has been established in part of the area with partially altered ecosystems of great scientific and practical importance. These are the areas of Valožje, the very peak Golemo Stražište and the isolated area of Rubovac-Cerje (Rebrine).

Protection regime of the third degree - active protection and possibility of sustainable use (15.073 ha 93 a and 65 m², or 83.21% of the area) has been established in part of the area with partially altered and/or altered ecosystems of scientific and practical importance, which are not in other protection regimes. This regime covers the whole area within the boundaries of protection.

Suva planina is located in eastern Serbia, in the southwestern part of the Carpathian-Balkan Mountain System, in the municipalities of Niška Banja, Gadžin Han and Bela Palanka.

Without protection status prior to 2015

Decree on the designation of the Special Nature Reserve "Suva planina" ("Official Gazette of RS", No. 72/2015)

Suva planina is a massif with remarkable phenomena and forms of karst relief, and a treasury of sediments of different ages rich in fossil flora and fauna. So far, 1261 plant species have been recorded on Suva planina, which accounts for one third of the entire Serbian flora. Among them, a significant number of species are of relict age and endemic character. The most prominent representatives of flora are Pančić's columbine (Aquilegia pancicii) and Serbian rose (Rosa serbica), the local endemics of this mountain. Suva planina is also characterized by pronounced vegetation diversity. There is an oak, beech and coniferous forest belt ending with mountain pine (Pinus mugo) belt, and within them are numerous communities of meadows, pastures, rocks, screes and rocky terrains.
Numerous ecosystems are inhabited by diverse fauna. So far 259 species of insects, 80 species of prime butterflies, 14 species of amphibians and reptiles, 13 species of fish, 139 species of birds and 25 species of mammals from Suva planina have been studied. Suva planina is inhabited by northern crested newt (Triturus cristatus), Hermann's tortoise (Testudo hermanni), horned viper (Vipera ammodytes), golden eagle (Aquila chrysaetos), European snow vole (Chionomys nivalis), wolf (Canis lupus), roe deer (Capreolus capreolus), wild boar (Sus scrofa) and many other internationally important species.
The traditional way of cattle breeding, wine and fruit growing, as well as numerous characteristic ethno-architecture objects from the end of the 19th century, represent a valuable and recognizable cultural heritage of this protected area. 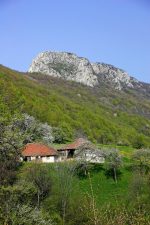 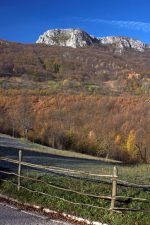 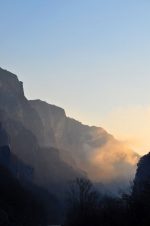